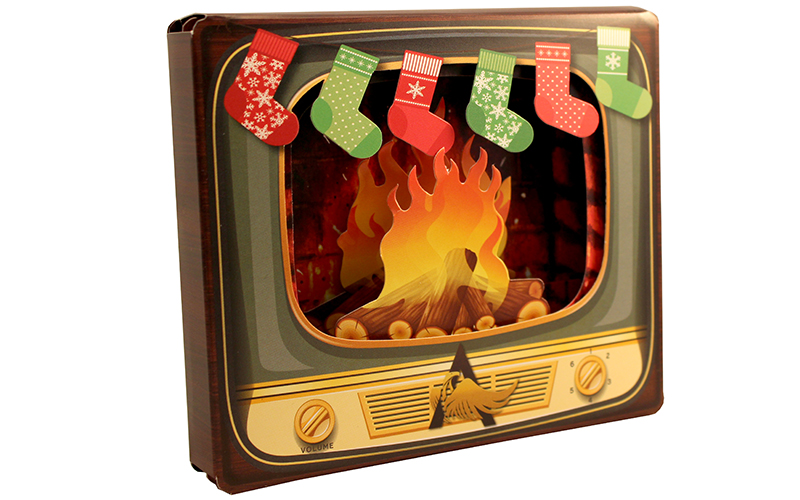 The Yule Log has been a comforting inspiration since its debut in 1966. The film of the burning yule log ran in New York for 23 years – up until 1989 – on the television network WPIX. The Yule Log was brought back to television due to unanimous wishes from a grieving nation after the attack on the Twin Towers in 2001, and ever since the film has been shown on WPIX on Christmas Day.

All American Labeling & Packaging, Dublin, California, created the Yule Log Christmas Card during the winter of 2020. After such a difficult year, the company wanted to make its annual gift to its customers really stand out with a unique concept. Leslie McCoy, director of marketing for the company, said, “With everyone experiencing the pandemic and being sheltered in place, we wanted the card to tie into the theme of the box, also while sending the sentiment home that they are not alone, and we can still gather and celebrate together even if we can’t physically be together.”

McCoy accredited the concept and design to All American Labeling & Packaging Creative Director Samantha Gomez. McCoy stated that, “Gomez concepted a retro TV showing the Yule Log fireplace to artistically show the Christmas Eve TV tradition that Fred M. Thrower had started in 1966. Much like the Yule Log Christmas Eve TV tradition did, our card gave everyone the opportunity to gather around the same fireplace even though we couldn’t physically be  together.”

All American Labeling & Packaging was born in 1995 out of a need for a full-service label company that could partner with its clients to help build their success and drive quality products. The company offers digital, flexo and offset printing as well as folding cartons, flexible packaging, grand format printing, prototyping, digital plate making and shrink sleeves, all produced in-house. This project was custom designed in the company’s in-house creative design studio.

What made the Yule Log Christmas Card unique was the special use of diecut layers as opposed to other finishing processes. McCoy commented, “Samantha wanted to keep a retro feel to the piece and let the diecutting and design
stand out vs. showcasing other finishes for this particular piece.”

“During the design stage, Samantha created many physical and virtual 3D prototypes to show various iterations of the design and how it could be executed on press,” remarked McCoy. “Our team created a custom CAD and printed the project on the Heidelberg Speedmaster CD102+6L. It then went to the diecutter (MK Easy Matrix) and off to the blanker (TRX 1100). The cards were then hand-glued and folded,” answered McCoy, when asked to describe the processes used to create the Yule Log Christmas Card.

The Yule Log Christmas Card embodies the essence of the holiday season in a remarkable way. The comfort can not only be seen, but also felt. This card showcases such a timeless, nostalgic feeling alongside the unparalleled craftsmanship of a diecut work of art – but with an original idea comes original challenges.

“The whole concept was built from scratch,” stated McCoy, “So there are always challenges when developing a new CAD with no reference point. We have a great collaborative team that rose to the challenge and used physical and 3D visualizers to establish the final piece. In finishing, the only challenge we ran into was efficiently gluing the product to get consistent folds. Our team ended up hand-gluing them to ensure perfection!”

Upon first glance of the card, the viewer takes in the warm hues of orange and yellow gleaming from the burning yule log in the center. The 3D card, made on 100# C2S paper stock, offers four specialty diecut layers to really draw the viewer into the TV set that is showcasing the burning yule log. A string of diecut red and green stockings hangs over the hearth, making the 3D effects of the fire pop.

Once the card is open, the viewer can see the inner workings of the TV set on the left side and a note from All American Label & Packaging on the right describing the Yule Log fireplace. The sign-off from the company reads, “May your days be Merry & Bright! Sending local love your way from your friends at All American Label & Packaging.” Once the card is closed, the backside shows the rear of an old-fashioned television set, to bring home the idea of the original concept brought to life by Fred M. Thrower.

During the process of creating a 3D card, many ideas and concepts must be considered. When asked if there was any special steps or precautions to take in the way of making the card, McCoy answered, “We work with the best suppliers in the industry, allowing us to run tighter tolerances on our diecuts than most. We pushed the limits on this tool to get the best effect and created a stripping jig to help punch the intricate pieces. It started with hand stripping in the beginning, but we were able to find a more efficient and consistent way in the end.”

As far as reviews from customers, the card was a vast success. “We were thrilled with how this project turned out, and it has inspired our creativity for this year’s (2021) card and box. Our customers and employees gave nothing but rave reviews for the card. Some still have them on display on their desks and in their homes. Best compliment we could get,” remarked McCoy. 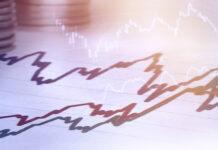 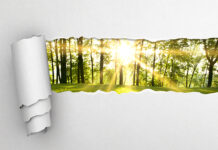