Thanks to the one-stop-shop nature of today’s print customers, binderies are increasingly becoming involved with in-line finishing processes – which can include slitting, folding, diecutting, gluing, coating, perforating, perfume scenting, rotary cutting, shingling, sheeting, and stacking. While the majority of the process involves mechanical devices that perform all those functions, electrostatics is utilized in the in-line finishing process to assist in the production of unique products.

Folding a web in preparation of making an envelope-like construction is one of the most common in-line finishing processes, which most often uses a folding section called a plow tower or plow folder. With successive plow folds, air can be trapped within the layers  eventually “inflating” the folded web into a “football.”

To avoid air entrapment, nip rollers can be used, although they will not stop the web from opening downstream. Electrostatic charging can squeeze the air out of the folded web and keep the web halves charged together, preventing them from opening in downstream processes. The best location to charge the plow folded web is at the point where the folding process is complete. Charging where the folding process is complete or registered ensures a good location to charge (all the webs are in intimate contact) and that what is charged together is intended to be held (so a charge does not prevent completion of a fold).

Whether in the case of a folded web or several ribbons of printed stock, a single charging bar in combination with an idler roller (as shown in Figure 1) or a pair of charging bars can be used.

In the case of the single charging bar, the bar is connected to a charging generator with the negative polarity output. In the case of the two charging bars, one bar is placed above the web and the other placed below. The ionizing pin electrodes of the two bars are generally aligned against each other. The positive polarity voltage is applied to one bar and the negative to the other from a pair of high-voltage charging generators or from a single generator with dual polarity outputs.

The immediate effect of the charging is that the web will “tighten up” or compress and be held closed by the electrostatic force between the front and back web surfaces. Any remaining air will be forced out from between the layers. This charging process can be repeated as more webs are folded.

A single web can be “married” into an existing plow folded web to add an extra unbound page. Static charging is an excellent way to make sure the single web does not slip out of register after it joins the existing web.

Coupons may be precut pieces loaded into a magazine and inserted with a special device, or the coupons could be in the form of a web, which needs to be diecut and placed onto the moving web. In either case, once the coupon is completely registered on the web, the coupon needs to be held in place to prevent it from shifting or slipping off the web. That can be done by a combination of pinch rollers and belts, or with glue.

Electrostatic tacking, with its ability to tack a coupon without any contact and with electrostatic force acting past the point of charge application, could eliminate the need for glue dispensing equipment and consumable material, as well as simplify equipment design by eliminating rollers and belts.

Rule 1. Use charging bars with the effective lengths one inch shorter than the most common web widths. If the bars are too long, extending beyond the edges of the web, a high portion of the charging current is flowing through the air between the bar and the grounded metal roller or between a pair of bars.

A single common length of charging bar can be used and angled when bar length exceeds web width. Holders normally used with in-line accessories, such as a fold helper or brush, also can be used to hold the angled charging bars.

The most effective operation can be obtained with charging generators featuring a constant current (CC) mode. In the constant current mode, the generator automatically adjusts the voltage to maintain the preset current. In this mode, the system maintains stable and strong pinning power adjusting output when there are changes in the line speeds, ambient conditions, or paper-dust buildup on the ionizing electrodes.

If a distinct purple or bluish glow is observed at the end of the bars, then the voltage is too high. Turn the voltage down until the glow disappears. Generally, with properly installed bars, voltage below 15 kV will be sufficient for most in-line applications.

Paper dust should not be allowed to build up or cover the electrodes. Clean the charging bars often. Use a metal brush to scrub through the electrode channel during makeready. This allows the strongest pinning power over a longer press run.

Note: Because in-line finishing products are shingled or stacked together, it can be useful to neutralize the exterior of the product before shingling or stacking. It also is recommended to neutralize the charged web before and, in some cases, after a rotary diecutter. Doing so will allow the completed products to shingle or stack without “clinging” together.

Seaboard Bindery Writes Its Own Story 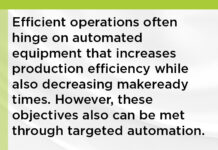