Einstein once wrote that the definition of insanity is to do the same thing over and over while having an expectation of a different result. One such area of manufacturing where insanity seems to preside is in the process used to produce cartons that are poly-coated and/or cartons that require a window film; more specifically, the insanity of gluing poly-coated substrates. In both instances, whether it be a poly-coated board stock or a window film to board, the surface is considered poly and as such poly (or plastic surfaces, for ease of understanding) is not easily glued, and can, in fact, appear to be glued only to have bond failure sometime after the process is complete. Below are six key questions to consider when developing a strategy for improvement and to avoid the pitfall of insanity when it comes to the gluing of poly-coated stock or window film. This is not meant to be an exhaustive review, but instead a general overview of some critical steps in making a good first step toward gaining greater returns.

The term “dyne” often is used for poly surface substrates. What does “dyne” mean?

Dyne is not something you do when you eat, but it is something that will eat profit, eat time, eat productivity and minimize success if it is not properly managed. Dyne is simply a mathematical term used to measure surface tension. All surfaces have a surface tension, but for a poly-coated surface to respond well to gluing, it is important that the surface tension or dyne level of a poly board or film be equal to or greater than 38 at the time of gluing, noting that the higher the dyne number, the better the treatment. For incoming film or material that has poly-coating, the minimum dyne should be 44 since you will lose treatment during the normal use and processing of the material.

Why is dyne important?

The dyne level of a poly surface is critical to successful gluing and must be managed if the process is to be consistent, efficient and sustainable. The primary reasons dyne level is important are simple: profits and customer relations. Success in business is directly proportional to making money and keeping good customers. Having control of the process, such as that you know what the dyne level is at time of gluing, will change the game in production of poly-type materials. Poly surfaces are not receptive to gluing without treatment, and the measurement of that treatment is critical to the process – if being more efficient, less wasteful and increased profits are important.

What is a good process to manage dyne?

Five components should be managed to monitor dyne treatments of a poly material: 1. Purchase properly treated material with a specification as to the dyne level. As a reminder, the incoming treatment of a poly surface board or film should be 44 or greater. 2. Check dyne level and record results at time of receipt of the material. Sometimes a shipment will not meet the specification you have requested, but without the quality check upon receipt there is no way to be certain. Also, capturing the data will help identify reliable sources and the ability to track the degradation of the treatment in-house as all treated surface will lose treatment over time. 3. Check dyne level throughout storage of material to avoid printing, cutting and gluing of low dyne materials; or at the least, to help prepare the manufacturing process for dealing with materials that have less than desired treatment levels. 4. Check dyne level at time of gluing as material will lose surface treatment within the process and storage. As previously mentioned, the dyne level at point of gluing is to be greater than or equal to 38 for more consistent results. As a note, there are special solutions and markers available for testing dyne levels. Dyne solutions are the best measuring tool and give more accurate results. 5. Work closely with an adhesive professional to identify test methods for measuring dyne levels properly and to identify the best adhesive product for bonding the poly surface material being used.

Does the dyne level of a poly surface, once treated, stay the same?

Absolutely not. As stated previously, treatment levels dissipate from the moment they are treated. The average life span of a treated surface for gluing purpose is approximately 12 months. Aged poly-treated material is a high-risk glue-able surface. The more aged a poly surface, is the more difficult it becomes to glue.

What can be done to help ensure glue-ability of a poorly treated, low dyne level poly material?

In some applications, skiving the material provides a solution to a poorly treated poly surface, but skiving creates dust and often time is inconsistent. A more reliable and cleaner process is to use inline plasma or corona treatment systems. These systems can be expensive, and proper use is essential to increase the consistency in gluing. Whatever the issue, having a knowledgeable resource that understands these challenging applications is essential.

Does it matter what adhesive is used to bond poly substrate?

Emphatically yes. Too often the wrong glue is proposed or used for gluing poly surface. Unfortunately, there are some adhesive producers that are not aware of the differences for gluing poly, and in many cases the one gluing the poly substrate is not aware of the potential issues. The reality is that using the wrong glue will create more cost than any factor related to the price of the adhesive. Be cost-effective more than simply price-conscious. Choosing the right adhesive supply will make you money and retain better customer relationships. Selecting the wrong or cheaper glue may cost you in profit with slower run speed, inconsistent gluing and wasted product, resulting in a strained customer relationship.

As with any process, many factors contribute to success. The dyne level is not the only factor to consider when gluing a poly surface, but it is a critical component. Understanding and managing the “dyne factor” will promote a better first step in the process. And as we know, a good first step makes way for better things to happen. Avoid the insanity of doing the same thing over and over expecting a different result. Review your process, control the dyne and enjoy the benefits of fewer complaints, better customer relations and increased profits.

PostPress would like to thank the Technical Service Department of Capital Adhesives, Mooresville, Indiana, for its assistance with this article. Capital Adhesives provides a full line of adhesives and glues for all types of finishing and bindery applications. For more details, visit www.capitaladhesives.com. 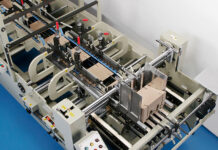 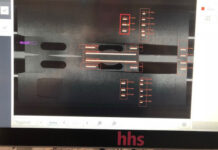 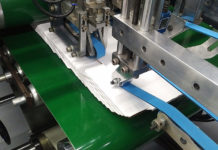