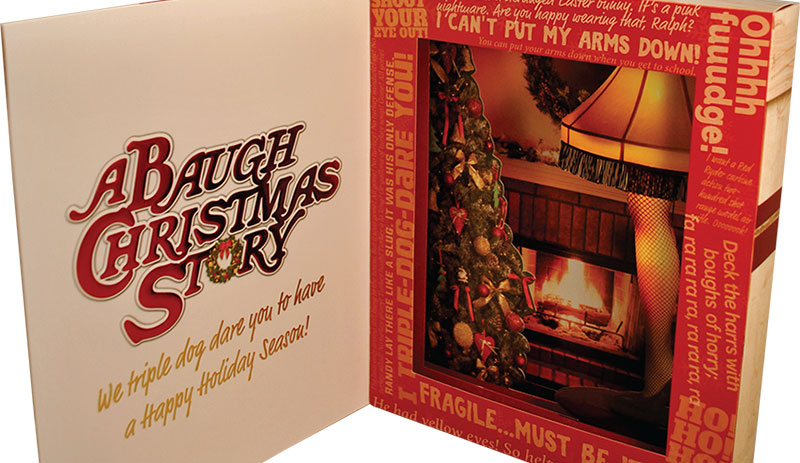 In the window of a two-story house on Cleveland Street in Hammond, Indiana, circa 1940, sits a lamp emitting a gentle light against a snowy backdrop – though it is no ordinary lamp. With “the soft glow of electric sex gleaming in the window,” the leg lamp prop used in A Christmas Story has become well-known since the movie debuted on Thanksgiving in 1983. This popular icon of the well-loved movie has made its way into pop culture, from Christmas ornaments to life-size replicas – even making its way onto the 2018 Christmas card from D.E. Baugh Co.

Wanting to design a multi-level shadowbox to showcase the company’s structural design capabilities, the Baugh production planning team chose “Fragile” as the inspiration for its 2018 Christmas card. This theme lends itself perfectly to the movie. As any fan may recall, the father – or The Old Man, as the narrator refers to him – receives a package in the mail with “fragile” stamped across it. And, one of the most memorable lines from the movie comes from this scene when The Old Man reads the word, mispronounces it as fra-gee-lay and claims, “It must be Italian.” As a nod to this scene, Baugh Co. designed the outside of the Christmas card to resemble the crate in which the infamous leg lamp arrived.

The multi-dimensional greeting card was formed from only one piece of stock. The book-style cover folding carton design “was taken from the home entertainment industries’ products from the mid-1990s,” explained Mike Western, director of operations/QA at D.E. Baugh. This successful design concept was planned months before the card reached clients’ desks.

Western said planning started in June of 2018: “In the first meeting, we discussed concept, construction and graphic direction with the Baugh planning team and Printing Partners.”

The Baugh production planning department designed the unique Christmas Story concept. Western said that once the concept and graphic elements were determined, the project was turned over to Baugh’s structural design/die room.

“Using Cimex 18.0 computer-aided design (CAD) software, we were able to create a CAD rendering of the desired construction,” Western said. Several construction changes were needed to ensure the card would set up and hold form for end presentation. “This was achieved with several versions of back folds, perforated scores and finished edges,” he explained. All samples were cut on Baugh’s Mimaki CF2-0912 plotter cutter. Once final construction was approved, the graphic elements could be placed to a CAD layout. At this point, a CAD drawing – marked with back printing, print-safe areas as well as no ink/coating areas – was sent to the design team at Printing Partners. This allowed the team to insert the graphic images chosen within the correct positioning. The CAD drawing would allow for proper fit as well as required bleeds for each manufacturing process. 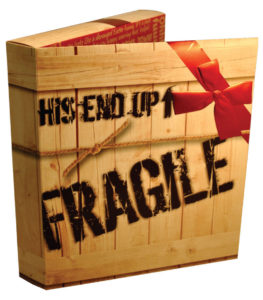 The Christmas card first was printed 1-up on a 28×40 sheet using a Heidelberg XL 106 on 12pt Invercote Creato C2S, which was chosen for its printing, diecutting and scoring properties. Western commented that using the Invercote Creato “was essential for the success of the project.” Additionally, special care was needed for the proper backup of graphic elements to ensure correct crossovers were achieved. “This was done through proofing and plotter-cutting out the proofs to ensure all elements were in correct position,” Western noted. “Graphic elements were duplicated on tuck flaps to hide any unwanted, ‘unprinted’ areas, which were visible on the wreath and fireplace.” All white areas were filled with the match red to ensure no white showed when viewing the card at any angle.

A Bobst foil stamping press was used to stamp the red bow that adorns the outside of the crate, as well as the greeting on the inside flap. Red and gold metallic foils from Infinity Foils were used in the greeting, “A Baugh Christmas Story” and the message, “We triple dog dare you to have a happy holiday season!” The ribbon, lettering, rope and wood-feel on the front cover all were embossed on a Bobst Novacut diecutter using Universal Engraving brass and copper tooling.

The shadowbox inside shows the leg lamp glowing against a holiday scene that includes a decorated Christmas tree and a wreath hanging above the fireplace with a fire ablaze. Just as the movie depicts, “The iconic leg lamp was chosen, as well as a few traditional Christmas items, to set the scene from a street view perspective,” Western explained. To give the card even more depth, the wreath, fireplace mantel and bricks, Christmas tree and leg lamp all were multi-level embossed, and the tree and leg lamp also were diecut with the NovaCut. Printed on the top layer of the shadow box are famous quotes from the movie.

When the team at Baugh set out to impress clients with not only its structural design capabilities, but also its high-end, high-quality, value-added services, they did not disappoint. According to Director of Sales and Marketing Dave Hurdle, clients were quite pleased, and Baugh received many positive comments about the holiday card. Baugh’s beloved holiday card was passed around and discussed at many production meetings and reportedly also sits on some clients’ desks. “Baugh is top of mind now because of your card when we think of foil stamping and finishing companies,” one client marveled.

With work already beginning on D.E. Baugh’s 2019 holiday card, Western said the company only started designing and sending clients Christmas cards in 2017. “Our first card was a play on our name, and we went with ‘Baugh Humbug’ as our theme that year,” he confirmed. “It was a lot of fun to work on, and it got us thinking about how to improve for the following year.” Baugh followed through on its commitment to improving its work. The celebrated 2018 card was noted for its success by not only the Great Lakes Graphic Association (GLGA), winning a “best of” category, but also by FSEA, where it won “Best of Show” in the 26th Annual Gold Leaf Awards.

“We were a bit surprised. We felt it was a strong representation of our capabilities, but we never imagined it was going to win an award,” Western exclaimed.