Home Articles Magic in the Cards: Foil Graphics Celebrates the Holidays with Special... 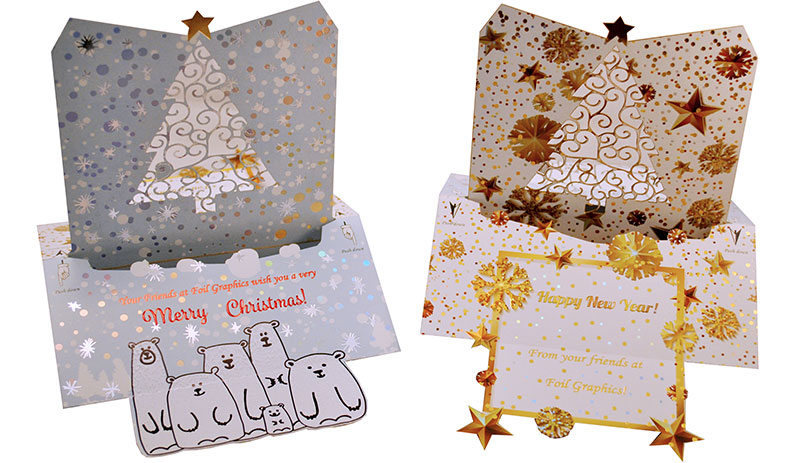 Bing Crosby may be dreaming of a white Christmas, but most designers and decorators would agree that Christmas is all about the bright, cheerful colors. It simply wouldn’t be the holiday season without a decadent array of red, gold, silver, blue and, yes, a little white. All of these traditional Christmas colors can be found in the very untraditional, stunningly unique card from Foil Graphics. The promotional “Merry Christmas Pop-Up Card” takes the classic Christmas card and gives it a bit of modern “pop.”

“We were after a design that could be kept as a unique piece that illustrated the special abilities we have developed over the years,” said Foil Graphics President Guy Pepoy. “We always try to push the envelope when creating a project that will represent our unique blend of capabilities.”

Naturally, pushing the envelope comes with certain challenges. For this particular piece, given the complexity of the design, finding the time to actually bring the final product to life was a challenge in and of itself. According to Pepoy, “Like all other self-promotional pieces, it was very difficult to get the press time to produce such a complicated item. Customers always come first, so with 12 press passes and the time required to hand assemble the piece, logistics became an issue to overcome.”

Creating the card was not the only thing that required a great deal of time. Simply choosing the design was itself a labor-intensive task. “We were not originally looking to make a two-sided pop-up,” said Pepoy. “After hours of scanning the Adobe stock pages, these two designs really stood out. After several more hours of planning, we found a way that they could be used together.” Thus, the double-sided pop-up was born.

Once the design was settled, the process didn’t necessarily speed up. The first of 12 press passes consisted of applying silver holographic foil to select snowflakes. Next, digital printing was registered to it.

The next three passes consisted of foil being stamped on one side of the sheet, followed by eight passes of foil stamped on the other side. For the next pass, laser cutting technology was used to create the scores and cut the center Christmas tree and the perimeter. For the final step, the bottom edge of the card was glued by hand.

The card itself was digitally printed on 130# digital C2s cover stock. The brass dies used were supplied by Metal Magic and the card was stamped on a Kluge stamping press. The red, silver and gold foils were supplied by Great Western Foils.

“We are used to hearing our customers say, ‘I don’t know how to do this, so I thought of you guys,’” remarked Pepoy. As a result, Foil Graphics has become skilled at coming up with unique products and designs. “We have found it to be challenging, but that’s what makes the work so exciting. This particular card has led to the creation of many other projects.”

The challenge is certainly worth it when the final product receives such positive feedback. Pepoy noted, “The card has been very well received by printers, graphic designers, agencies and anyone who has seen it. We’ve had many discussions from people asking, ‘How did you do that?’ or ‘You put digital over the foil?’”

Given the positive attention the card has been given, it’s little wonder why it recently received a gold award for technical difficulty during the 26th Annual FSEA Gold Leaf Awards in the Best Use of Foil/Embossing – Greeting Card Self-Promotion category. The award is sure to add a little extra Christmas cheer to a piece that is already merry and bright. 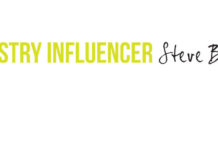 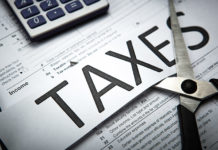 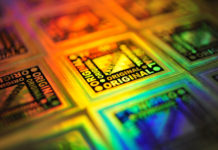 Holography on the Front Line of ID Security and Protection