I. Differences in plasticizers

What you should know
Although you might expect that “chemical” incompatibility be at the root of most wrinkling, it is, with today’s technology and vinyl manufacturing techniques, not the common cause for wrinkling. Chemical reactions usually manifest as random circular bubbles in the material.

The plasticizers commonly used in the calendaring of vinyl for heat sealing are liquids, usually with the viscosity of vegetable oils. They are added to powdered vinyl resins and are absorbed into the resin in a heating and mixing operation called compounding. The plasticizer molecules allow the resin molecules to “slide” against each other, which allows the vinyl film to be flexible.

There are many different types of plasticizers available that have been developed to provide specific end use properties. Most of the plasticizers that are used in vinyl calendering are from the phthalate group. The common ones are DOP (Di-n-octyl phthalate)*, DEHP, (Di (2-ethylhexyl) phthalate)*, andDINP, (Diisononyl phthalate). Note that DOP and DEHP are considered identical plasticizers.

Other plasticizers are from the adipate group. Adipates are usually used to impart better resistance to cold crack. A common one is DOA (Dioctyladipate).

Although the adipates are efficient plasticizers and perform very well in many applications, they have a different molecular structure than the phthalates, are more volatile, and have a greater tendency towards movement (migration).

What you can do
When welding two different vinyls together, check with your suppliers to be sure that the plasticizer systems that are used in each of their vinyls are compatible (i.e., from the same group). This is a routine caution and most suppliers will freely give such information.

Avoid using vinyl made from recycled scrap when welding two different materials. The formulations in the scrap can contain adipates and other incompatible ingredients.

What you should know
Differences in formulations are probably the most common cause for wrinkling. Wrinkling caused by differences in formulation can appear as a combination of irregular ripples and bubbles which are most seen near the corners of the welded product where the heat of the die has accelerated and exacerbated migration.

Every vinyl is formulated to perform in a specific end use application. The classic example is the end use differences in flexible opaque and clear vinyl. A producer of opaque vinyl for bookbinding would be primarily concerned with workability in the heat-sealing process, as well as some cold crack resistance, and would build his product accordingly. Since plasticizer acts to facilitate welding and helps to improve cold crack resistance, a typical opaque bookbinding formulation might contain 33-35 parts of plasticizer for every 100 parts of resin. Since the surface of the opaque product is usually embossed with a texture, the opaque producer is not concerned with the vinyl sticking together after sheeting.

The producer of double polished clear vinyl has different considerations. Since he will focus on transparency, his surfaces are as highly polished as glass. If he makes the vinyl too soft and flexible, it will stick together (block) when his customer sheets and stacks the vinyl. Therefore the clear producer will use very little plasticizer in his product (at the sacrifice of some welding and cold crack properties). Typical plasticizer volume in a “non-tack” clear vinyl formulation would be in the 24-25 parts of plasticizer per hundred of resin.

Here is a typical range of vinyl products from one manufacturer that shows their plasticizer content, going from soft to firm:

Because plasticizers are organic compounds, the materials, over time, will attempt to go into PHR balance. This means that plasticizer will attempt to leave the softer material and migrate into the firmer. When this happens, the firmer material (usually the clear) swells. Since the material is welded to the opaque and has nowhere to go, the displacement shows up as wrinkles in the clear. Another result is that as more plasticizer moves into the clear, the clear becomes softer than when initially produced.

Time is also a variable. Molecules of plasticized vinyl become more active as temperatures are elevated and will migrate faster. Another factor is how tightly the materials are pressed together. Heat, pressure, or any combination of both will accelerate migration.

What you can do
Specifying formulations that are closer together in PHR levels is one solution for very large custom runs but is impractical for everyday products. Be aware that decreasing the PHR in opaque will make the material more brittle and susceptible to cold cracking. Increasing the PHR in the clear vinyl will result in tackiness, which will make the clear vinyl difficult to handle for sheet fed work.

The best that the heat sealer can do when working with typical materials is to work to retard the transference of plasticizer:

What you should know
Both chemical and mechanical factors interplay to create shrinkage in vinyl. From a mechanical point of view, there must be some tension when winding up vinyl on rolls at the end of the calendar. A loosely wound roll would tend to telescope when moved. A tight wind helps to prevent the roll from flattening and reduces pressure marks during shipment and storage. Shrinkage caused by tension in wind up is called “snap back”. It usually occurs and is completed within a few hours after the vinyl is sheeted from the roll. A side effect of snap back is that as the vinyl shrinks in the calendaring direction, there is some slight increase in the width dimension. Attempts at introducing artificial shrinkage in low PHR vinyl by stretching at windup have not been successful.

A typical specification for mechanical shrinkage calls for not more than 1% change in dimension after 24 hours at room temperature.

After snap back is complete and as the vinyl ages, there will still be some residual shrinkage. Since flexible vinyl is a thermoplastic material, other stresses introduced in the manufacturing process will relax, causing the material to further condense over time. Another important consideration is the amount of plasticizer in the formulation. Softer vinyl tends to shrink more than firmer vinyl since their elasticity and elongation rates are higher. This brings us back to PHR of plasticizer differences in the formulations of two different vinyls that are being welded together. Normal bookbinding opaque vinyl with 33-35 PHR will tend to shrink more than a double polished clear vinyl with 25 PHR of plasticizer. Wrinkling occurs when two vinyls are welded together that have different rates of shrinkage. When one vinyl shrinks more than the other, the vinyl that shrinks less is displaced and this shows up as long undulating ridges of material. This wrinkling is exacerbated as the differences in the rates of shrinkage increase.

What you can do
Snap back can usually be handled in sheet fed work simply by giving the vinyl time to relax in low lifts after sheeting. Only a few hours is required to eliminate snap back problems. If roll feeding, dancer bars (accumulators) should be used to give the vinyl time to relax before reaching the welding die. Avoid introducing any tension in web feeding that could stretch the vinyl, especially when using softer materials.

With chemical shrinkage, since it is the nature of vinyl to shrink, heat sealers of two different materials should work with their suppliers to be sure that the vinyls that they are using have rates of shrinkage that are as close together as possible.

One highly respected bookbinder claims that he has minimized wrinkling by developing dies and heat-sealing techniques that weld the vinyl very tightly to the board and uses the board itself to staunch the vinyl from excessive shrinking.

As we have said before, when vinyl shrinks in the calendering direction, it can grow in the width. This sometimes causes a binder to look great coming off the heat sealer but “bag” a few days later. Vinyl sealed tight to the board will also minimize bagging.

Never cross grain materials when welding them together. Be sure that both pieces are taken from the roll in the same direction.

When packing heat-sealed products allow some space between the product and the top of the carton to absorb the weight of stacked cartons and not put pressure on the edges of the products.

Distortion (wrinkling), is an inherent problem when welding two dissimilar materials together. If the job is big enough to order specific vinyl formulations, the problem can probably be avoided at the outset if the heat sealer is willing to compromise some of the properties in each vinyl that makes them dissimilar. One can specify that the vinyl manufacturers use the same plasticizers and close the gap in the PHR proportions.

When this is not possible, the objective becomes to extend the amount of time that it takes for wrinkles to appear and to reduce the severity of the wrinkles by following some of the suggestions in this article.

The good news is that over the years, vinyl suppliers and their customers have made great strides in working together to create compatible products. The problems of incompatibility are much less frequent and much less severe today than they have been in the past. 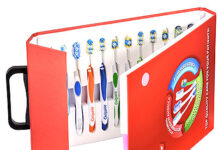 Bound for Success – Loose Leaf Keeps Up with the Digital Age 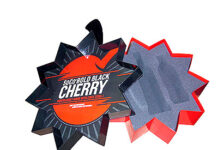 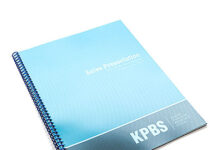