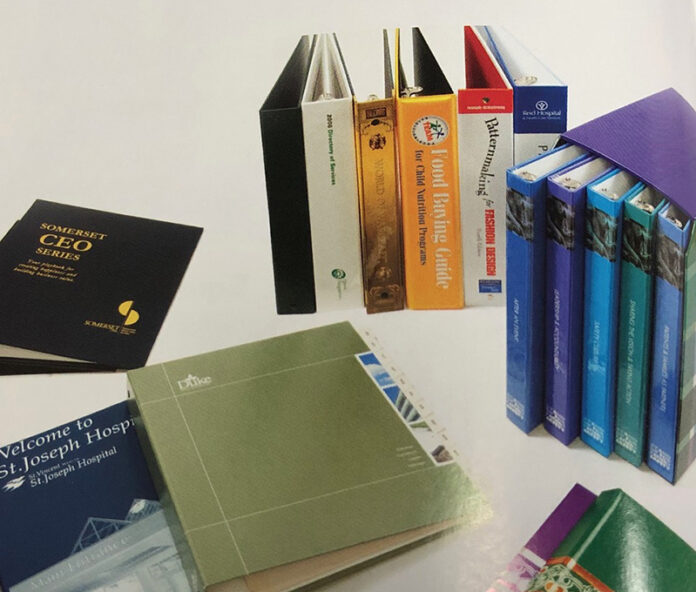 by Amy Bauer, The Binding Edge

Bookbinding and custom information packaging require different skill sets, different equipment and therefore different cultures, but Eckhart & Company, Inc., of Indianapolis, IN, has successfully merged the two to create a business that has expanded its market base beyond traditional boundaries.

“We’re really in the business of providing solutions to information packaging and information management,” said President Chris Eckhart, describing the company’s core competencies. “Having the two allows us to provide more solutions.”

Clients from the Midwest and throughout the country seek out Eckhart & Company’s mechanical binding, case binding and perfect binding services, as well as its custom manufactured and decorated ring binders, CD and DVD packaging and turned-edge materials such as slant/slip cases, among other products. Its central location in Indianapolis, often called the ‘crossroads of America,’ has helped Eckhart & Company serve a geographically diverse client base. “We have a large reach with a local touch,” Eckhart explained.

Son William (Bill) Eckhart Jr. took over the business and the company continued to grow as a traditional trade bindery, serving local printers and specializing in cutting, folding and stitching. In the mid-1960s, Eckhart & Company built a 35,000-square-foot plant in an Indianapolis industrial park.

“As cutting, folding and stitching equipment became more affordable and easier to operate, more printers began bringing those capabilities in-house,” Chris Eckhart described. “So we focused our attention on adding services that printers really craved but were loath to try themselves.”

This led to the company’s focus on mechanical binding. Also in the mid-1960s, to expand the company’s market base, Eckhart’s father added the loose leaf manufacturing segment, which today falls under the company’s information packaging banner. As the company grew, additional space was rented in a separate facility. Working from two locations made labor efficiencies difficult, so about 10 years ago the company consolidated operations in a 60,000-square-foot plant in an industrial area of northwest Indianapolis.

Chris Eckhart grew up in the business and began working there full time in 1987, a year after his graduation from Indiana University. In 1994, he and his brother, Brent, bought their father’s shares of the company. And in 2006, Chris Eckhart bought out his brother’s shares. Today, his 24-year-old stepdaughter, Taylor Stauffer, works in quality assurance for Eckhart & Company, representing the fourth generation of the family business.

While Eckhart & Company offers all of the traditional bookbinding services, it is closely focused on mechanical binding, including Wire-O, spiral binding and plastic coil. Among highlights of Eckhart & Company’s mechanical binding capabilities, Chris Eckhart said, are its two Bielomatik automated binding lines, which can punch and bind in a single pass with high production speeds of 1,500 books an hour or more. It also operates, among others, a Kolbus Casemaker and Kolbus casing-in machine and a Gateway Bookbinding Systems plastic binding machine that forms its own coil from filament. Mechanically bound jobs cover a wide range, from calendars, planners and journals to cookbooks and instruction manuals.

“Mechanical binding is unique because it is based on work with single sheets rather than signatures,” Eckhart explained. Differences in how those sheets are handled throughout the plant are important. Stacks that slide can quickly turn to disordered pages and ruined jobs. “Because mechanical binding is a focus for us, we understand that. We’ve worked hard to acclimate our employees to the differences.”

In its other core area, information packaging, Eckhart & Company considers itself a complete manufacturer. Its capabilities include taking projects from raw materials through preparation, decoration (it has in-house screenprinting and foil stamping capabilities) and conversion into a finished product. It offers vinyl binders, turned-edge binders and polyethylene or polypropylene binders; slip cases; boxes and index tabs.

Despite those differences, the company has found efficiencies and success in cross-training its employees so that they are capable of multiple jobs throughout the plant. The company is composed of about 65 employees and runs two shifts. Since work in each area may ebb and flow, this allows the company to respond more efficiently and shift employees to different projects and areas as needed. In the past, workers were dedicated to specific areas. “Having one common labor pool that can go where the peaks and valleys are is critical,” Eckhart said.

In-house training has been essential because few workers come to the company with experience in both mechanical or other binding methods and binder manufacturing, not to mention the decorating processes. “There’s a true art to screenprinting, for example,” Eckhart notes, “just as there is a true art to running a folding machine. We have to go out of our way to work with them for the cross-training.”

Another challenge to the information packaging segment of the business is a decline in demand as more information is digitized. “The information packaging is becoming, year after year, a smaller component of our overall business,” Eckhart said. He described printed pieces, such as the product catalogs that furniture manufacturers send to distributors, which in the past were perfect fits for the binder application, but today may no longer even exist in printed form. He said the company is focusing on cultivating customers for higher-end binder products that will continue to exist in the print realm – for example, the financial services literature that brokers or sales representatives share with clients that must reflect the prestige of their product.

Beyond the challenges, having these diverse capabilities under one roof also has been a boon to Eckhart & Company. It is finding opportunities to combine the binding work and custom packaging for clients. For example, Eckhart said, a recent job involved manufacturing a vinyl binder and also gathering, trimming and drilling the text, wrapping the text and inserting that package inside of the binder. “Our ability to handle that complete project under one roof was very comforting to our customer,” Eckhart described. He said his strategy involves marketing the synergies between binding and information packaging to potential clients, perhaps helping them to give a printed piece even more functionality than they had originally envisioned.

Other ways the company markets its services are through its sales representatives, who call on printers and other clients and are dedicated either to the binding operations or to information packaging. By focusing on their particular areas of expertise, they can better help clients with the intricacies of the finishing processes, Eckhart explained. “Truly realizing what our core competencies are and then setting up the business so that we can be resources in each one of those areas has been a really positive sales and marketing concept for us,” he said.

One way this sales focus has paid off is in the company’s growing relationships with local printers in the past few years, Eckhart said. While the company traditionally has been closely aligned with medium- to large-size web printers and book manufacturers, it also has shown its ability to process the shorter runs involving sheet-fed printers and the local graphic arts companies. The company also has used monthly email newsletters to highlight its services, choosing a particular product or binding style to feature each time.

Networking is another way that Eckhart stays abreast of customers’ needs and challenges. He is a member of the boards of the Binding Industries Association and the regional Printing Industries of Indiana and Illinois.

Another selling point for some clients is Eckhart & Company’s line of environmentally friendly binders, made of 100 percent biodegradable materials, aside from the metal ring. They boast materials that are free of acid, carbon black, lignin and elemental chlorine, and Eckhart & Company also can custom decorate these. Eckhart said that this product hasn’t overtaken the company’s conventional binder offerings, but it represents an important offering for some clients.

Eckhart said the shift to a sales orientation has been a challenge, noting that in the past the work just naturally flowed and many companies in the industry didn’t have to work very hard to bring in business. For many years, Eckhart & Company had been able to rely solely on its reputation of quality work to sustain incoming business.

“There was very much a mentality of being order-takers versus being strong marketing- and sales-driven companies,” he said. “There was enough business that it kept everybody happy, it worked fairly well and there wasn’t a need to invest heavily in the sales and marketing process. But those days have certainly changed.

“It takes a very conscious commitment and effort to switch from being an order-taker to creating a culture of going out and being a sales- and marketing-driven company,” he continued. “Kind of a tough hurdle for a lot of companies in our industry to come across, us included.”

At a time when the print world is rapidly changing, Eckhart sees both challenges and opportunities. “I believe that we are operating in a mature industry, but I don’t believe that that is a death sentence,” he said. “I think that print is going to decline; however, I think there also are going to be fewer printing companies and fewer companies serving printers.”

For those that remain, he anticipates there will be plenty of work to be profitable. By focusing on the challenges and synergies of its two core offerings under one roof, and continuing to look toward the future, Eckhart & Company is positioning itself to adapt in these changing times and be a binding and finishing for future generations. Eckhart predicts that surviving companies will be those that look toward more technology and automation, as he sees currently happening in Europe.

“We’ve worked hard to be financially responsible and to be in a position where the options are available to us as to how we navigate forward,” Eckhart said.