That’s the mantra for printers, finishers and equipment manufacturers alike. With the rise in use of digital printing and its growing popularity, keeping the customer happy comes with a whole new set of worries for postpress experts.

Customers expect their projects to be completed faster than ever, said Tom Alvis, owner of Seattle Bindery and Finishing. “Fast turnaround time, more and more digital printing and short-run jobs – these have been the trends for the last decade. We actually downsized our perfect binding capacity so we could be competitive on short-run jobs, and we decided to get out of the large-run market.”

The Seattle, Washington-based postpress house specializes in custom tabs and presentation folders; folding and stitching; foil stamping, embossing and diecutting; plastic spiral; Wire-O®; perfect binding and film laminating. Embracing the digital print trend didn’t come without headaches, though. “The biggest challenge we find with digital print is the inconsistency in how finishing techniques work with products off of the different manufacturers’ presses,” Alvis said. “The chemistry is different. We do foil stamping, UV coating and laminating, and all three processes require adhesion to digital print. That is where we find the biggest challenge.”

Digital print certainly has sped up the printing industry and increased turn times, said Neal McEwen, president of McGraphics, Inc. The only real disadvantage digital has to traditional printing is the registration issues. “Back in the old letterpress days, there would be gripper and guide marks,” he explained. “With digital print, we are getting things that have little to no registration. However, digital printing registration really has improved over the last few years.”

McGraphics, Inc. is a family-owned graphic finishing house located in Nashville, Tennessee. Tommy McEwen is the company’s owner and his son, Neal, is the president. “My father started the company in 1986,” Neal McEwen said. “We have fewer than 25 employees, but have grown over the years to fill a 20,000 square foot facility.” He said his grandmother also worked for many years in the graphic finishing industry. “We’ve had three generations in this industry and have seen many changes and trends over the years,” he said.

The company now is seeing more variable data work, McEwen said. “We do a lot of scratch-off foil stamping, probably four to five jobs a month of coupons for department stores and (car) dealerships. It has greatly increased our workload in many ways,” he said. “It’s also hurt us in other areas. With that said, my only real complaint is the lack of registration.”

Alvis said figuring out how the various finishing techniques will work on digital print can be time-consuming. “Until a customer sends in a specific job off of their machine, we don’t really know if UV coatings, foil or laminating films will adhere or not,” he said. “Some digital printers also use fuser oil that leaves a residue on the sheet. Sometimes, we physically have to wipe the sheets down with rubbing alcohol to get anything to stick to them. We notice that the most with UV coating – the UV coating will scratch right off. However, if we rub the sheet down with alcohol, it will stick beautifully.”

He said his company also has had to change the UV coatings that it uses to find one that will adhere to digital print. In addition, foils sometimes won’t stick to certain color areas. “I would say the most critical issue would be with laminating films. With foil and UV coating, we know right away if it is sticking or not,” he said. “With film laminate, we laminate the sheets and think they look good. However, if we let the sheets sit for 24 hours, like we prefer, before scoring, diecutting or cutting the laminated sheet, sometimes the laminate peels away from the edges. We’ve also seen the laminate stick to the image ink or toner, but then the ink or toner delaminates off of the paper. Out of all the heartaches with digital, that is the biggest one.”

Another issue with digital print that Alvis noted is dry, brittle paper. “Some jobs will score and mold great, but the paper will be so brittle that no matter how we score it, it is going to crack,” he said.

There are minor financial impacts because more testing is involved, he said. “We are happy to do testing because, while there is cost involved in doing a test, it is better than paying for a reprint. Nothing makes the customer unhappy more than that,” Alvis explained.

McGraphics also provides testing as a courtesy for its customers – mostly with scratch-off foils. “We do need to make sure that our foils will stick to their inks or their digital prints,” McEwen said. “Sometimes, customers will bring in a couple of sheets for testing and we will throw those sheets in on a random die to make sure everything will work correctly.”

Customers expect these postpress experts to be, well, experts, Alvis said. “They want us be able to work out any potential issues. And, if we can’t, we should be able to tell them ahead of time, not when the product already is in their hands.” For that, testing is key, but potential customers don’t always have time for that. “Those unknowns can end up costing some sales,” Alvis said.

Even with existing customers, he said, testing comes in to play. “Once we’ve worked with a customer for a while, we are aware of what the digital jobs will require, and we know if there will be challenges,” he explained. “The first thing I do when I get a new customer – or someone has changed something on their press or gotten a new digital press – is ask them to send over sheets with heavy coverage so we can throw them through the UV coater, add foil and put them through the laminator. That way, we know what will or won’t work.”

McEwen acknowledged that digital print shops, as well as digital press manufacturers, utilize different formulations regarding inks and papers, which is where testing plays a part. “All digital printers are different, but the digital inks and papers we work with are just fine,” he said. “It works basically like any other print job that comes in and we complete whatever finishing process the customer desires.”

From the manufacturer’s standpoint, modularity and flexibility are the keys to successful digital print finishing operations. “Simply sheeting off the press can leave opportunity on the table,” said Lance Martin, director of sales for MBO America, Marlton, New Jersey. Martin talked about the numerous changes affecting all stages of production, and especially, finishing.

“The most competitive printers today are offering an increasing range of products, from long-run offset to complex, variable jobs – with the fewest touches – and all while ensuring tight, verifiable control and reporting. They want the efficiency of going from a roll to finished product without handling it. Years ago, they wanted a box that made sheets,” Martin said. “Now, it has to fold, perforate, glue, affix cards, plow, diecut and track – and then be ready to switch to something else. We no longer have one line that works one way, to produce one product.”

On top of increased types of production, postpress manufacturers have had to incorporate support for more media, as digital press OEMs are figuring out how to print on more stocks to bring costs down on digital print processes.

Last, but not least – for now – is a changed labor pool. Martin said this is “another interesting phenomenon to consider.” He noted that manufacturers cannot make machinery that requires a deeply skilled journeyman operator making constant adjustments. “The operator has to be able to set the equipment up with minimal input, if any at all.”

MBO prepared for these changes years ago, when it began migration to a business model based on system modularity, and in doing so now can support customers with cost-effective, flexible, automated solutions for all types of products “Customers can easily integrate and reconfigure lines to build systems that create complex results, but are simple to operate,” he said. “There is pressure on the industry for higher margins. We have to continue to take inefficiencies out of the equation. We have to figure out how to use less labor and increase automation to make our customers more competitive.”

Moving forward, Martin sees a couple of trends on the horizon, including the introduction of more operator-friendly machines. He also sees a push for better use of variable data. “That isn’t anything new, but as people talk about the variable data ability of a press, we are learning more and more about how it can affect finishing too,” he said. “Any time a bar code goes down, we have to gather it so the finishing machines do something special for the customer.” Martin doesn’t think the full potential of variable data has been realized, either. “We are getting better every year, but we haven’t tapped into its full potential,” he said.

Overall, Martin sees tremendous growth in the industry. “We’ve seen a lot of big pushes in the last six months. The entire printing market – all the major markets really – has seen increased activity. It’s good for the industry and we are prepared for it.” 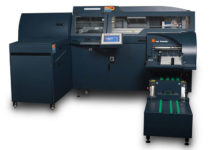