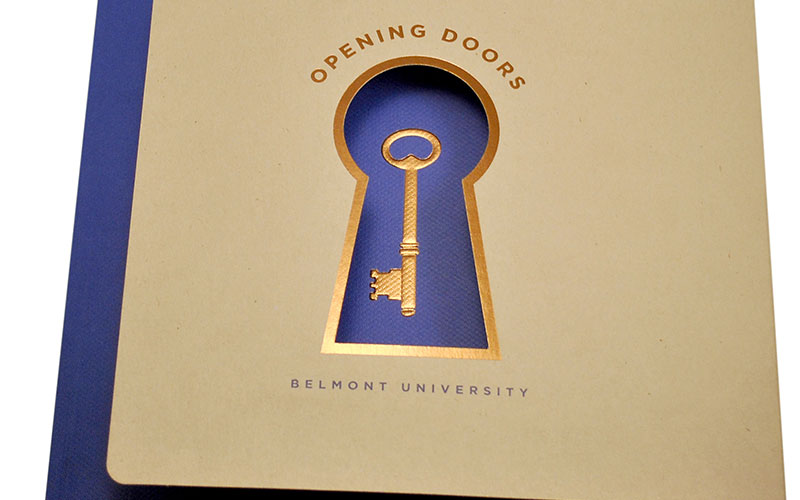 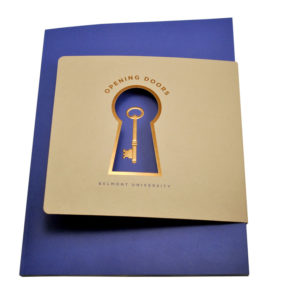 The idiomatic expression “opening doors” means to create opportunities for advancement, whether in one’s career, education or other aspirations. At Belmont University, a private Christian university located next to what’s been dubbed Music Row in Nashville, Tennessee, “opening doors” is the phrase the university used to title its softcover President’s Report. This annual publication offered a quick glance at the school’s key initiatives and featured statistics and photographs from the year.

To create an unforgettable cover for the “Opening Doors” report, Belmont called on McGraphics, Inc., a full-service graphic finisher – also based in Nashville – to accomplish the unique design.

“The biggest challenge with this job was positioning the stamping, embossing and diecutting so that the stamped and embossed key on the cover was centered inside of the diecut and stamped wrap keyhole, considering the capacity of the book,” McGraphics’ CFO Brian Clements said.

The first portion of the project was a wrap around the cover of the report. Using a light-colored tan recycled cover stock, the headline “Opening Doors” and the outline of the diecut keyhole was flat foil stamped with a copper die from Universal Engraving, Inc., using a copper metallic foil from Kurz Transfer Products. It was stamped on McGraphics’ Kluge EGH. The keyhole then was diecut on a Thomson diecutting press with steel rule dies produced in-house by McGraphics. The diecut keyhole was designed to show through where the key is foil stamped/embossed on the cover of the President’s Report.

The diecut steel rule die also included rounding the edges of the wrap on the front side and the scoring of the stock where it wrapped. “We received a prototype of the finished book prior to scoring the wrap to make sure it was in perfect register,” stated McGraphics Account Representative Fred Weisbrodt. “It was critical that the scores were perfect because the diecut keyhole had to be centered perfectly over the foil stamped embossed key on the cover.”

The cover of the report was fashioned from a bright blue 100# cover stock with a soft linen pattern. The cover included a foil stamped and multi-level embossed key centered on the page and perfectly centered to show through the diecut keyhole on the wrap. The key first was foil stamped with copper dies using the same copper Kurz foil as was used on the wrap. Then, a second pass included a multi-level embossing of the key to create a 3D effect on the cover. Both dies were supplied by Universal Engraving, Inc.

The unique aspect of the emboss was a pattern within the key that matched the linen pattern in the paper itself. “Because the run of the book was relatively small, we chose to foil stamp and then register emboss the key,” continued Weisbrodt. “This helped provide the best quality emboss and is just as fast to complete as a combination foil and emboss in many cases – especially for smaller quantities.”

With the embossing pass of the key, a single-level blind emboss of the President’s Report seal was performed at the same time on the cover on a Brausse 402F press. Using the Brausse for the embossing helped guarantee the right pressure that was needed to “bottom out” the embossing die and get the most out of the multi-level embossing of the key.

Once the covers and wrap were complete, they were sent back to the printer, where the inside pages were perfect bound to the special cover. There were 60 pages, printed 4 over 4. The first page, a translucent Vellum sheet, added another touch of class to the report. The last page of the report also included the same translucent Vellum sheet with a quote from Belmont President Dr. Bob Fisher.

The unique Belmont University President’s Report took home the Gold for Best Use of Foil/Embossing – soft and hardback book cover (creative design) in the 26th annual FSEA Gold Leaf Awards. “The finished report ended up being exactly what the customer was looking for,” commented Clements. “It always is satisfying to meet or exceed the customer’s expectations.”