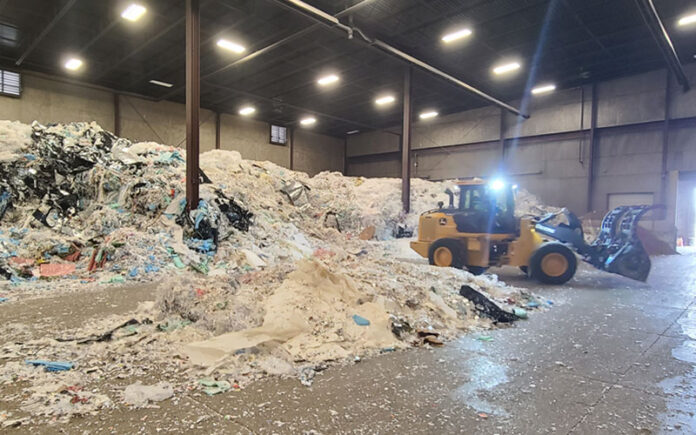 Sustainability. Recycling. The circular economy. Everywhere one turns, there is another reminder that resources are finite, that waste and pollution are engulfing the planet and that everyone can be part of the solution rather than part of the problem.

For print finishing companies, recycling of industrial paper scrap is old hat, along with recycling inks and managing wastewater. But what about non-recyclable scrap, such as films and materials that are coated, treated or laminated? What should be done with these in a circular economy? There is good news: Much of these types of waste can be converted into fuel by producing energy in waste-to-energy operations. Specialized collectors accept tons of non-recyclable industrial pre-consumer waste, moving it to processors that make feedstocks (fuel) for energy producers. The processor sells the fuel to utilities that produce steam or electricity.

To help print finishers explore an option for diverting their own non-recyclable scrap away from the landfill and into a waste-to-energy stream, FSEA has partnered with Channeled Resources Group. This Chicago-based company, founded in the 1970s, has acted as a facilitator for 13 years to Convergen Energy, Green Bay, Wisconsin. Convergen uses non-recyclable byproduct to make fuel for energy. The chairman of Channeled Resources, Calvin Frost, recently discussed sustainability and non-recyclables-to-energy as it applies to films and coated, treated or laminated paper or film.

“Convergen Energy has an excellent cost-neutral, sustainable solution that any converter or supplier can look at,” said Frost. He noted the benefits of sending industrial waste to facilities like Convergen: It is a cost-effective alternative to sending the same materials to a landfill; there is satisfaction in knowing that materials have been properly disposed of and returned to a value stream; it allows one to play a part in reducing overload and methane in landfills; and, it makes a contribution to sustainable energy generation – a slate of benefits that may be in line with a company’s corporate and environmental philosophy. “We now are processing 7,000 tons a month of these non-recyclable substrates, working with a variety of companies that want to be more sustainable,” Frost said.

Convergen is consuming more than 30 non-recyclable materials. Almost all pre-consumer paper and plastic products are acceptable. Of particular relevance are film, metalized PET, poly-laminates and flexible packaging byproducts. Some materials cannot be accepted, such as aluminum, organic material, hazardous materials, liquids, metals and anything containing chlorine, such as polyvinyl chloride (PVC). To ensure a print finisher’s load of materials is acceptable, companies must send in a small sample of materials for review – a pound or less of representative materials and substrates.

Frost and Channeled Resources work with companies like Kurz and IPW. Also, “We currently have a small volume coming in from FSEA members,” said Frost, “but we have the ability to take more, if we can find the right partners.” Frost noted that his company recently has worked with Lake Forest, Illinois-based Culbert Packaging, which has just started a metalized line. “The company wants to be sustainable,” said Frost. “It doesn’t want to landfill, so it is shipping 5,000 pounds every six weeks up to Convergen Energy. Culbert is working with the same kind of substrates that FSEA members use, and the company is shipping less than truckload quantities.”

Truckload quantities are the bulk of what typically is shipped for processing to Convergen in Green Bay. “Most of our material is coming in full 20-ton loads,” Frost explained, “and the trailers are dropped off. For a load of less than 20 tons, companies need to make an appointment so the truck can be scheduled for unloading. Otherwise, the full trailers are dropped, and Convergen will unload 24/7 as it processes the trailers.”

“In Green Bay, the material is processed and then compressed and extruded into fuel pellets,” said Frost. Convergen sells the fuel pellets to power generation facilities. The company also uses the pellets to fuel its own 20-megawatt boiler-based power plant in L’Anse, Michigan, which then supplies electricity derived from renewable energy to DTE, a Detroit-based energy company. “If you really want to be sustainable,” Frost said, “if companies really want to close their loop and create a circular economy, they can send non-recyclables to be processed into fuel. The fuel then goes to a utility, where the energy generated in the boiler is sold to the grid. Then companies can buy the energy back again.” To Frost, this is a great example of the circular economy. “What this does is close the loop. It is possible for printers to participate in a program that will make them more sustainable,” he said.

The cost-benefit of this kind of sustainability is fairly easy to calculate, but it varies based on the shipping fees for waste transport and the regional costs for landfill use. Frost cited an example using a 20-ton measurement, a standard truckload, and the landfill costs in Southern California. “I know a lot of printers and finishers don’t have 20 tons, but we look at costs in 20-ton increments,” he said. “In San Diego, the cost to landfill and transport waste to the landfill is $248 per ton. The total cost for that, based on 20 tons, is $4,960. If printers send the material to Convergen, we charge a $30 per ton tip fee (unloading fee) plus they pay for the freight. With their freight cost at $3,600 and the tip fee, the total cost is $4,400. At $4,960 for the landfill option vs. $4,400 for Convergen, printers are saving $560.” Based on Frost’s experience, “by switching from a regional landfill, looking at all costs, printers are pretty much cost neutral or can save some money.”

The recommended minimum volume for a shipment of non-recyclable waste is 2.5 tons, but this kind of volume may be far more than print finishers are generating. “I honestly think it doesn’t make good economic sense unless printers have a minimum of 5,000 lbs – 2.5 tons,” said Frost. “We do have some small suppliers in the Midwest, and they really don’t want to landfill. They have made commitments; they want to be sustainable, and so they are shipping us 2,500 lbs.” Frost acknowledges that smaller shipments will incur a relatively higher freight cost. He said that dealing with anything less than 2,500 lbs is not practical for either the print finisher or for Convergen. But Frost is a man who likes to be resourceful and make things happen. “We have proposed to an FSEA member in Indianapolis where Channeled Resources has a plant that they ship their materials to us, and we will consolidate it with other non-recyclables going to Green Bay.” Channeled Resources has two plants in the US, one in Indianapolis and one in Wisconsin. “We certainly can utilize those, if necessary, to try and make these things work,” he said. “Otherwise, companies can make an appointment and ship LTL to Convergen in Green Bay.”

FSEA members who would like to explore the idea of
diverting their non-recyclables from the landfill are encouraged to contact Channeled Resources for detailed information about the materials that are acceptable and unacceptable for the program, the logistics of shipping, and information on regional landfill fees and typical shipping costs. “We will try and help with information on packaging and information on cost for the material,” he said. “To qualify acceptance of the material, we have to send a small sample up to Convergen.” Once a company contracts with Convergen Energy, Channeled Resources steps back. “Our role is really to be a facilitator,” said Frost. “We go out and develop sources of feedstocks for Convergen. Once we have the process set up, we connect companies directly with the people at Convergen, and we move on. We don’t need to be involved unless a problem develops. Our role is to develop these feedstock sources.”

Frost is active in Europe and has seen the European Union pass legislation regulating packaging waste. “What happens in Europe eventually comes over here because we are working with global companies,” he said. Frost sees a circular economy as inevitable. “We have to change what we are doing. We cannot continue to take non-recyclables to the landfill. It doesn’t work. I would rather be ahead of the curve than behind. I think the time to get on the train is now – do not wait until companies are forced to do it.”

This article is based on the September 18, 2020, FSEA webinar, “Sustainability Meets Print Decorating,” which is part of FSEA’s Online Learning Experience, available
at www.youtube.com/watch?v=Lygpk6o9mN4 or at
www.fsea.com.