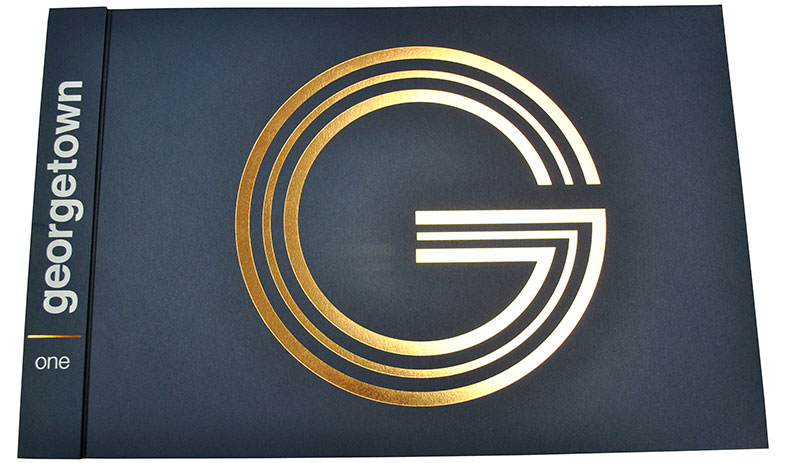 “Georgetown is a big idea, with a big future,” declared real estate development company Anthem Properties Group, Vancouver, British Columbia. Located in the heart of Surrey City Center, Georgetown is one of Anthem’s latest residential developments. In order to appropriately convey just how big Georgetown’s future is, Anthem turned to Thought Shop and Hemlock Printers to create a stunning promotional book for its clients.

Pacific Bindery, also located in Vancouver, British Columbia, was chosen to produce the bindery aspects of this project and was more than capable of rising to the challenge. The result was a softcover book that is just as big on visual appeal as Georgetown itself. The 10-acre urban community, which includes residential towers, townhomes, office and retail space, is beautifully depicted in 44-pages of full-color photographs, maps and architectural renderings.

Three rings of metallic, copper-colored foil combine to form a single letter – a bold “G” that stands out against a simple, navy background. The Georgetown G decorates the otherwise modest cover of the coffee table-style book. By opting to use a landscape format for the book, designers were able to make full use of an increased display area. The wider page styles allowed floorplans for the different buildings and apartments to be shown in larger sizes. Visually, it created a more impressive design that allows potential customers to get a better idea of all that Georgetown has to offer.

On a more practical note, the landscape-style also “allowed the pages to lay flat much easier than portrait pages that have a much narrower width and a much longer binding edge,” remarked Jean Stewart, account manager for Pacific Bindery. “It lends the book a great sense of presence when displayed on a table.”

The book cover itself was produced on 14 pt. Mohawk Carnival Cover in Deep Blue. Two different foils were used – the Copper #143 foil forming the prominent G and Gloss White foil used to spell out Georgetown along the binding, as well as Anthem’s name, logo and website on the back cover. Both foils were supplied by Great Western Foil.

Once the foiling was complete on the front and back covers, a register emboss was performed on the copper foil. Overall, the entire cover required two passes for the foiling, with an additional pass for the final emboss.

With the foil and embossing completed, an independent pocket then was glued onto the back cover. Next, D-tape was applied to the unfinished covers. The 44-pages of text were cut, collated and gathered together with the front and back covers. Finally, the book was bound using the relatively simple style of side stitching.

However, stitching was not the end of the binding process. A section of the stitched pages was folded and creased on a platen, creating a slightly raised portion along the side of the front cover. This raised section was hand-folded and manually taped, resulting in a unique look for the finished project.

“The look is a rare one,” Stewart explained. “We call it ‘Matchbook binding.’ It is a simple stitching job, but the wrapped cover over the stitching creates an altogether uncommon finished look.”

While the book itself may appear simple at first glance, the binding definitely garners a second glance that reveals something unique and special – just like Georgetown. The book has proven popular for Anthem. After being released for only a couple of months, Anthem requested further reprints for its clients.

At the 26th Annual FSEA Gold Leaf Awards, Pacific Bindery claimed awards in five categories, two of them for Georgetown in the categories of Most Unique Binding and Best Use of Foil/Embossing – Soft and Hardback Book Covers.