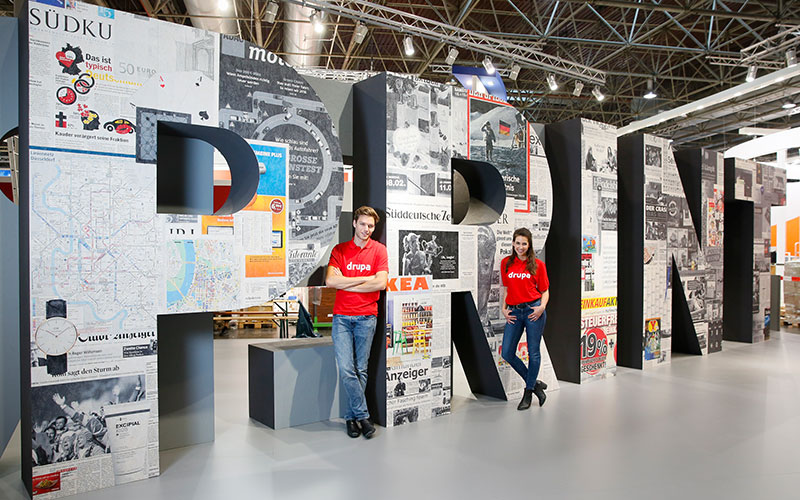 The development of digital print is reminiscent of the advent of the modern airbrush: Suddenly there was a new technology for releasing ink onto paper. It was easy to learn and use, and it quickly became popular. With this new tool, a whole new art form started, taking photorealism and photo retouching to a completely new level. Digital printing can do that as well and be the new airbrush for the graphic design community; an exciting new chapter that easily expands design capabilities.

As designers, customers also have changed, and so have their marketing and branding requirements. This affects what is required from designers – basically, it changes the designer’s own product. In the past, branding was based on consistency with the psychological rational that familiarity will lead to brand recognition, brand preference, buying and loyalty. When so-called Generation X walked into a supermarket and saw the myriad brand options on the shelf, their hands would somehow instinctively reach for the one that was familiar, that looked the same as it always had, reminding them of home, of safety and of predictability.

Then the millennials came along, who were brought up to expect personal service. Safety or predictability was less of an issue, familiarity was nothing to them. On the contrary, it was boring. Millennials do not see themselves as part of a crowd; they prefer to be seen as one of a kind. They expect brand owners to treat them as individuals and target products specifically to them. Sustainability also became an issue and, altogether, mass production and traditional advertising were not cutting it. As a response, marketing departments and advertising agencies started developing more targeted campaigns with activation tactics to reach and appeal to these new consumers, but still, overall, the personal touch was mostly missing. Millennials, who grew up with the internet, certainly are more used to sharing their personal data in exchange for content. They are happy to participate and click if this means the brand will acknowledge them personally. They expect brands to use this data and get the product right.

Now comes Generation Z, which is even more internet savvy in every possible way. To them, the technology comes as naturally as the air they breathe; it is taken for granted. According to a recent report on customer trust trends from Salesforce, “Although a slim majority of consumers still are wary of companies’ intentions when it comes to handing over personal data, Gen Z and millennials are more game to take that risk — as long as they are getting something in return.”

So, how do companies offer customers the right product in today’s consumer market? The ultimate answer to this question is: with digital print. Digital print allows companies to control and change the data on a print product, using information the consumer has given to make it the most relevant product possible for them.

At the moment, there is a gap between the possibility or idea and what the design world actually is doing. In most cases, designers – being unaware of the potential of digital – still design for any print technology, being wary of color-limitations and definitely not using the digital tools potentially available to them for an improved brand experience. The ability to close this gap lies in the hands of the print vendor (or print service provider). Proactive and agile printing firms can help their customers achieve huge marketing success by offering them such design tools.

Some big, international brands have begun to use these tools to deliver astonishing, impactful campaigns where digital print enabled the product itself to become the media. One such campaign was done by Coca Cola in Israel.

Coca Cola in Israel was looking to increase its Diet Coke sales, and the brand manager – an innovative young millennial – was seeking something new, something different. Having experienced the power of digital print with the ‘Share a Coke’ campaign in summer 2014, a campaign that broke the boundaries of personalized mass production, she realized the staggering results of the campaign pointed to an obvious customer need or desire. She then reached out to the marketing team stating, “We need two million bottles, every single one different from the other – doesn’t matter how. Just keep the logo and ingredients as they are. Everything must be on-shelf in two months.”

A combined effort between R&D and design teams came up with ‘HP Smartstream Mosaic,’ an algorithm that manipulates the design result. It is a plug-in for Adobe CC and very easy to use. The result is one that manual labor could never achieve. How does the algorithm work? In short, the designer supplies the ‘seed pattern’ and the algorithm manipulates it into different results each time a page is printed. Never repeating, always changing. The design work took two weeks, with 23 seed patterns created to achieve two million individual designs. Digital print allowed a fast turnaround, and the product was on the shelf on time.

Many marketing researchers have concluded that millennials and Generation Z continuously are changing the way consumer experiences are being created. Cause-driven marketing plays a large role in this change, and brands and marketers should find a cause to stand for to impact these generations. Amarula, a liquor brand from South Africa, embodies this by supporting the ‘Save the Elephants’ campaign. Elephants are being relentlessly poached for their ivory, and the Amarula brand has been supporting the cause to save them from the start – symbolized by the elephant on its label.

Using HP Smartstream mosaic, Amarula put 400,000 different bottles on-shelf, each with a differently designed elephant that represents a living one. Two seed patterns were designed, and the rest was handled by the digital press and software. For every bottle purchased, Amarula donated money to a foundation it partnered with. Digital print enabled this emotional, big-issue message to get across on-shelf as every bottle could be as unique as every real elephant. Just as with Diet Coke, the message from the brand to today’s younger generation was carried on the product and was supported by a 360˚ campaign, which drove consumer engagement and brand equity through the roof.

Today’s consumer market thrives more and more on personalization and brand communications; however, many brands still are confused by this fundamental consumer change and by how it affects their supply chain. Printers themselves hold the key to new digital print capabilities but don’t actually participate in marketing strategy talks with brands or their designers. And so the gap remains. The design community has a real opportunity to unleash digital as its new airbrush to create beautiful, personalized, multi-channel campaigns and to enable a new kind of marketing.

This article originally appeared as part of the drupa 2021 article series: Essentials of Print. For more information, visit www.drupa.com.

Hadar Peled Vaissman is an independent international art director who helps brands improve their communication, mainly through customization, personalization and individualization. She believes that these will elevate a company’s relevance in a digital world.