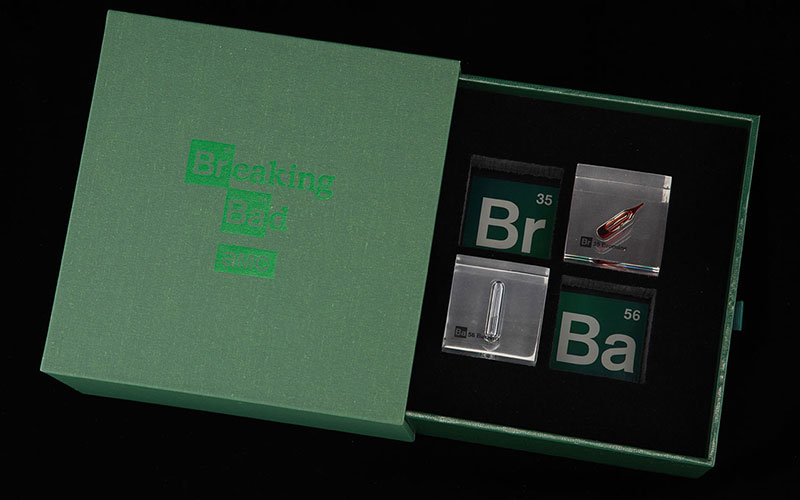 What do a motorcycle club and a premier print consultancy and production firm have in common? They were both founded by the talented and creative David Drucker. In addition to orchestrating motorcycle rides to honor veterans and POWs, and delivering two pieces of steel from the World Trade Center to the Marine Museum in Virginia, Drucker, CEO of high-resolution, located in New York, New York, also has been creating unique commercial productions since 1983. In doing the work other Manhattan printers couldn’t do, Drucker and his company earned a reputation for delivering high-profile, intricate and demanding productions.

As the hit crime drama “Breaking Bad” prepared for its final season, Drucker was contacted by AMCtv to create a special piece as a remembrance of the show. The idea behind the piece was to combine the show’s branding with design elements that reflect its premise. “We collaborated to produce a desk trophy for a very limited group of people,” he explained. Additionally, highresolution created unforgettable packaging to house the prize. “Each box was built by hand,” Drucker said. “We previously had worked with a particular manufacturer for very high-end, smaller boxes, and we knew he could give us the details we wanted regarding how this box opens, shuts and secures the product inside.” 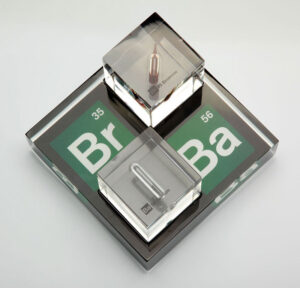 The sturdy packaging highresolution designed to protect the ornament was a heavyweight turned-edge sleeve and box that was wrapped in Hollander’s Arrestox Bookcloth, from Cover Material Sales Inc., Hyannis, Massachusetts. This covering is green linen, matching the show’s brand color, with a water-based acrylic coating, providing increased resistance to blemishes like tears, scratches and stains. The top of the box featured the show’s “Breaking Bad” logo, foil stamped with a green metallic foil.

The material was wrapped over the edges before being glued to the inside as a hardcover book would be. “We used a nice, thick board on the inside so it would have a straight edge going around it,” Drucker added, “and I think that’s why it has lasted this amount of time.” To this day, years after it was first assembled, there is no fringing on the ends.

The black felt-covered inside of the sleeve holds a drawer that easily slides out, thanks to a green ribbon attached to its outside. In the drawer sits a fitted, two-inch-thick section of padding – a piece of foam covered in black flocking – containing four identical cutouts. Two of the cutouts hold a pair of two-inch acrylic cubes each with a glass vial – one with Bromine, one with Barium and both with screen printed acetate featuring the appropriate element’s chemical symbol and atomic number embedded into the acrylic.

In his mind, Drucker pictured the cubes not on a wooden or metal base where light would detract from the piece, but he imagined light coming through them. “I needed to figure out how to acquire that light,” he said, “so I built a custom-poured acrylic and branded the bottom – something I’d never done before.” This transparent, 5″ x 5″ x 1½” acrylic base sits under the padding and hand-polished cubes, allowing the chemical symbols that have been screen printed reverse image in green, white and black to be visible from nearly any angle. On the bottom of the base are silicone feet, “so somebody could lift it with their finger without it sliding and scratching their desk,” Drucker stated. 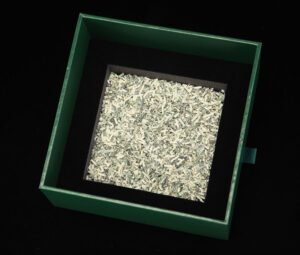 Clearly, a lot of thought was given to each aspect of how this entire piece was built – even to what lies beneath to cushion the trophy. Staying in theme with the show, underneath the base sits a pile of cash. Unfortunately, the $100 bills are shredded, but thankfully they help protect the printing on the bottom side of the acrylic.

Drucker takes considerable pride in understanding each one of his projects inside and out before he ever writes it up as a job order. “For me, the key is information and quality,” he said. So, it should be no surprise that he knows each hiccup or hardship that comes with a project. For example, in their research, the design team discovered a German company with the two relevant elements encapsulated in acrylic squares, but the company didn’t have enough of either for this particular project. After checking pharmaceutical companies in the US, Drucker said that his client found some in England. “This was the missing link in producing this piece,” he exclaimed. However, during the heating process, one of the capsules began to leak during a test run. “We ended up having to get a new round, and when we ran that test we were able to successfully encapsulate them,” he added.

“The creative process is what they called me in for,” Drucker noted, adding that his client was quite pleased with the finished product, a blend of old world and modern technology. Starting with the desired end result in mind, Drucker worked backwards – considering substrates, the vehicle for shipping and protecting, and all of the major and minor details to make this a one-of-a-kind treasure.