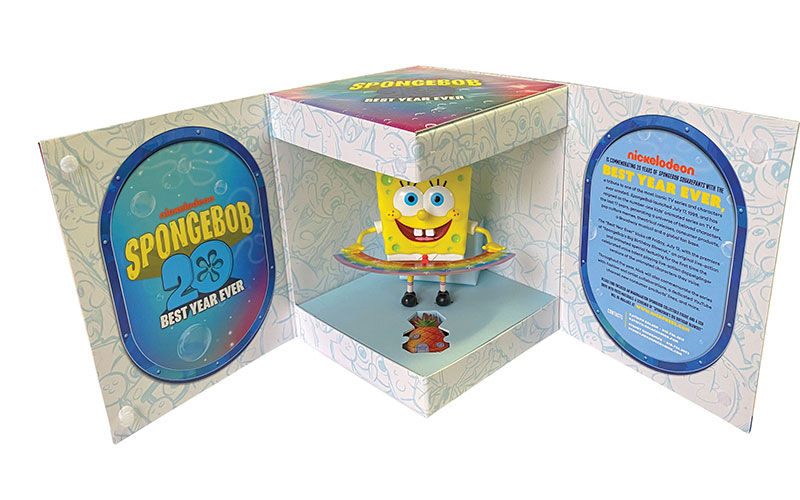 “Who lives in a pineapple under the sea?” – SpongeBob SquarePants Theme Song

Few people could hear the iconic opening line to one of Nickelodeon’s most well-known shows and not immediately feel the urge to shout “SpongeBob SquarePants!” while singing along with rest of the song. First aired in 1997, the show boasts an impressive record as the number one kids’ animated series on television for 17 years – an accomplishment that all but demands celebrating.

Commemorating 20 years of the pop culture icon, Nickelodeon released a press kit – SpongeBob 20 Best Year Ever – which takes SpongeBob out of his pineapple to be showcased in an interactive package designed to appeal to anyone familiar with the beloved character.

When it came to creating the interactive packaging, “It was a challenging but rewarding process,” said Mitch Holsborg, president of C&C Bindery and Packaging, Farmingdale, New York, who worked with Nickelodeon to design and construct the press kit.

At first glance, the presentation box delights viewers with colorful artwork depicting the well-known images and landscapes of SpongeBob’s undersea home, Bikini Bottom. The graphics originally were created by Nickelodeon before being fine-tuned in-house, along with the final package design, by C&C Structural Engineer Richard Vallone.

It wasn’t enough for the presentation box to simply showcase some of the show’s iconic artwork. That art needed to pop out at viewers. Various specialty effects and coatings were incorporated into the design to make this happen. The outside of the box features Infinity Blue metallic foil and spot UV coating to help draw attention. Sheets were diecut on a Bobst 102EII diecutter, with foil stamping performed on a Saroglia foil stamper. The package was offset printed, with the spot UV coating applied over the offset. All dies were supplied by Universal Engraving, Inc. 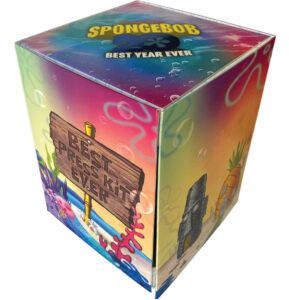 With the final artwork nailed down, attention turned to creating the presentation box itself. As the package was meant to be interactive, a sturdy structure was crucial. As a result, C&C opted for 100lb text stock that then was mounted two sides over e-flute. Part of the challenge of the box was that each one had to be folded, glued and assembled by hand.

Another challenge C&C faced was figuring out how to incorporate a plastic SpongeBob figurine into the packaging while having it remain an interactive element. The plastic figure features moveable arms with a rainbow glued to its hands. The SpongeBob figure wasn’t the only interactive element that had to be incorporated into the inside packaging, however. Nickelodeon also provided a USB in the shape of a pineapple that would need to be showcased as well.

“Making the figure and the USB stand out and seem animated were  challenges,” said Holsborg. In the end, SpongeBob was secured inside the display box using ties and reinforced with a cardboard stand. “Integrating a plastic figure with paper and coatings and making it interactive took the talents and experiences that C&C has been known for,” he reaffirmed.

C&C’s efforts to create a truly unique interactive presentation box were well received. According to Holsborg, the box continually has been described as one of the best interactive package designs ever. Furthermore, the box received a silver award in the 2020 FSEA Gold Leaf Awards in the Best Use of Foil/Embossing – Rigid Box category.